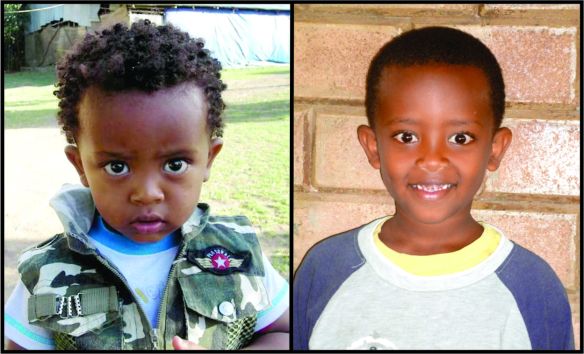 Tinsae upon entrance to the BCI Program in 2008 and Tinsae at the BCI Academy in 2012.

When thinking of your own life, do you sometimes like to look back to see where you were compared to where you are now? Well, at Blessing the Children (BCI) we love to do that with our program children. It is a great way to see the impact that the sponsorship program has had on a child’s life.

Cute doesn’t even begin to describe Tinsae at age 2 when he was first added to the BCI program. Five years ago, Blessing the Children met Tinsae and looked into his big, beautiful eyes and fell in love. Now those big, beautiful eyes look back at all that has happened to him in the past 5 years and he is so happy, grateful, and loves BCI for caring for him.

When Tinsae was 2 months old his mother dropped him off with her mother and step-father. She left and hasn’t been heard from since. It is assumed that both of Tinsae’s parents are deceased. He has an older sister that is in her late 20’s but she is mentally impaired so she is unable to care for Tinsae.

For the next 4 1/2 years Tinsae lived with his grandmother and her husband. They cared for him as best they could but they were both very elderly and very sick. Also, there were four other children living in the house so providing for the children was hard on only their retirement income. Tinsae very often went to bed hungry.
When I first met Tinsae three years ago, he was very rambunctious, stubborn, and a troublemaker. He hadn’t been taught how to behave properly and he was always getting into trouble. I remember thinking that Tinsae was so cute with his big eyes that set him apart from other kids but he was such a trouble maker.

But due to changes in his home life, Tinsae is a completely different child. He is well-behaved and polite and considerate. About 1 1/2 years ago, Tinsae’s grandmother passed away and his step-grandfather left Ethiopia to go live with his children. Tinsae’s aunt and uncle stepped up and not only took Tinsae in but they also took in the other four children that lived with the grandparents and another extended relative.

A lot of times in Ethiopia, when children are taken in by extended family members they are treated as the house servant. They are typically required to get up early and work until late in the evening preparing meals, cleaning, taking care of babies, and washing clothes. Fortunately, Tinsae does not have this fate. His aunt and uncle treat him as their own child. When you walk into the house there are family pictures everywhere and they all include Tinsae in them.

Tinsae says that he loves being a part of the BCI program because he loves going to school at BCI Academy. He has heard about government schools and he feels happy that he gets to go to a better school. Tinsae is an eager learner. He always wants to answer the teacher’s questions and he is eager to learn new material.
Tinsae is a happy, well behaved, well nourished, thriving child. Due to the help from BCI (breakfast feeding program and monthly food distribution) Tinsae is doing great physically. He also has free healthcare from the BCI program so he is rarely sick and he gets a vitamin every day at school.

It is encouraging to see how much of an impact BCI has had on Tinsae’s life. BCI is happy to be a part of Tinsae’s life and to see him grow into a strong young man. We eagerly look forward to seeing what God has in store for Tinsae.