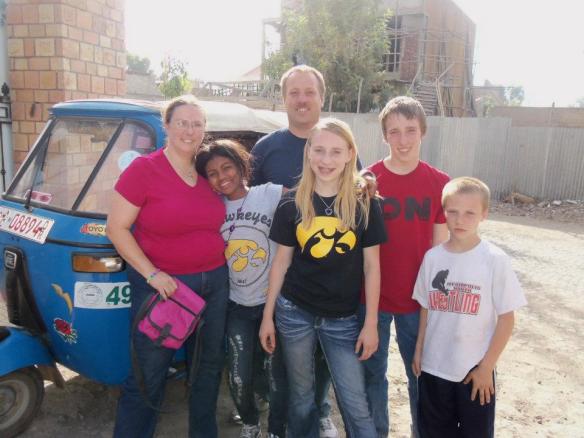 Our adoption story starts back in 2007.  God led me to the website of an organization called Blessing the Children International to sponsor a little girl named Genet.  In one of the newsletters that they sent me it talked about going to Ethiopia on a mission trip, and I heard God telling me to go.  “Go?” I asked, but I have never even been on a mission’s trip let alone out of the country before – even more scary, on my own.  But God persisted and I went, not sure why I was going other than to minister to kids and meet our sponsor child.

While I was there in February of 2008, I met this precious little girl, Haben, and her young cousin Lidiya. They stole my heart.  God told me to pray for them every day and so I did, not sure why again but who wants to argue with God?  While we were there we went to an outreach church at Green Lake. When asked what their greatest needs were, Pastor Berhuna said clean water and good roads.  I heard God saying clear as day, “This is why I brought you here, to bring these people clean water”.  You see, our home church works with a group that made clean water units to take to areas like this to make their water safe.

So I returned home to plan my second trip to Ethiopia in 2010 to bring the water units, still praying for Haben and Lidiya’s protection every day.  I took my daughter and a group from my home church the second time and we brought 7 water units with us to take to the places that so desperately needed them.  While we were there we had two girls from the foster home come stay with us, Lidiya and Chu Chu.  And I fell in love with them, but especially with Lidiya. It broke my heart to have to leave her, but I could not just pack her in my bag and take her home, it is not that easy. I knew in my heart God wanted me to bring her home to be our daughter, but my husband was not so sure.  We started sponsoring Chu Chu and praying about adopting Lidiya.

In December of 2010, God helped my husband to see that we should adopt Lidiya, and so we started down the journey toward adoption.  Now, how to go about it? We spoke to a friend who had also adopted a child associated with BCI and God led us to an agency out of Florida, who said they would look into seeing if they could help us.  With the help of BCI staff, especially Nigist (Lidiya’s social worker) and Mussie (BCI’s Ethiopian Director of Teams) we were able to get the paperwork needed to get Lidiya to the places she needed to be in order for us to bring her home.

Our journey has taken us 16 months to bring Lidiya home. We are so blessed to have her and I praise God every day that he had brought us to BCI and to Lidiya for I do not know what we would do without her as part of our family. And as for Lidiya’s cousin, Haben? Well, she is our newest sponsor child, a way to keep Lidiya and Haben connected even though many miles keep them apart. So what is that still small voice telling you to do today?