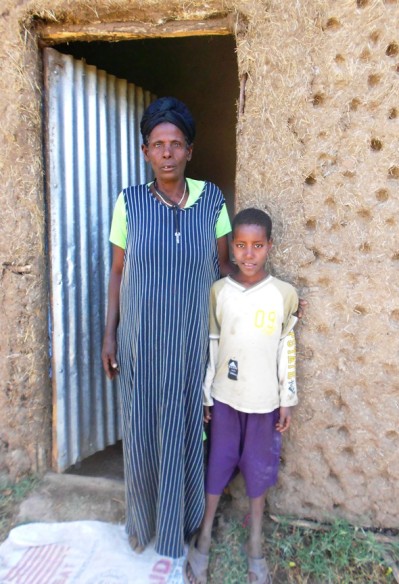 Abreham Gudu is a seven year old boy that is shy when you first meet him but once he becomes comfortable with you, you better watch out!  He is full of energy and a little bit of mischief.  But he is also a very loving boy that just wants to snuggle up to anyone that will put their arm around him.  Abreham is very inquisitive and hasn’t been exposed to many new things in his life.  When given a toy, he inspects it fully and plays with it in different ways to see how it works best.
Abreham is currently the family translator.  He and his family were living in a rural part of Ethiopia called the Grogan area so his grandmother does not speak Amharic (the language most spoken in Debre Zeit).  Over the years, Abreham has picked up Amharic and he translates for his family as his siblings have not learned Amharic either.  Abreham is in the process of learning English.  When he does he will be trilingual!
Abreham lives with his grandmother and four siblings.  Both of his parents died when he was younger.  Abreham’s mother died during childbirth while she was giving birth to his younger sister and his father died shortly after that due to unknown causes.  After his parents died his grandmother thought it was best to move her grandchildren from the rural area to Debre Zeit.  She thought that Debre Zeit would have more job opportunities for her because it is a larger city.  Life didn’t work out exactly as she had hoped.  Life has continued to be hard and she has continued to struggle to provide for the children.  The family lives in an 8×10 ft one-room house that has a dirt floor.  There is only a full-sized bed and one twin-sized mattress that the family shares.
Abreham’s grandmother does not have a job so she struggles to find a way to provide for her five grandchildren.  The children sometimes sell vegetables on the side of the road or at the open air market to make money.  However, there are months when there isn’t enough money to pay rent and buy food.  These are the months when Abreham’s grandmother is especially grateful for Blessing the Children.  Because of Blessing the Children, the family receives monthly food support.  However, the support is not enough to feed a family of six.  In order to increase Abreham’s food intake, sponsors must be found for him.
Abreham is still in need of $60/mo to be fully sponsored.  Would you please prayerfully consider sponsoring this young boy?  Full sponsorship provides the child with an education, food support, and medical care.  In addition to providing for Abreham’s basic needs a sponsorship will also let Abreham know that someone in the world cares for him and wants to help him grow into a strong man.  Children are able to correspond monthly with their sponsors and the children love this part of the program.  They love to receive letters from their sponsors and they love to learn about the sponsors’ culture.
Every child in the BCI program is precious and just wants to be shown love.  That is what a sponsorship teaches these children: that they are worthy and that someone is willing to take a chance on them.